This past week I painted my first figures from the new Bones 4 Kickstarter; the Giant Bats from the Darkreach Expansion.  They aren’t the most exciting figures to start with, but they are some of the creatures from the Kickstarter that I’ve eagerly been waiting for to help complete my Bestiary for our Ghost Archipelago Campaign.  So I picked these, that I had a pressing need for, to start with.
These figures are the new Bones Black material, and  I prepped the figures in the usual way; soaking them in a dish of water with a couple drops of dish-soap added and then rinsing and drying.   I then glued the one on the tombstone to a 1" fender washer, and the other 2 to 7/8" black-primed fender washers, with Aleene’s Tacky glue.  I then glued the figures to a tongue depressor with a couple drops of the Elmer’s glue each. 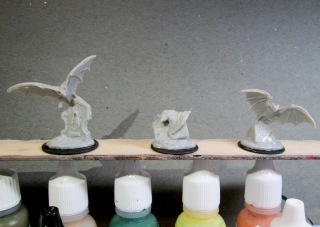 I began by painting the all three figures entirely with Ceramcoat “Black”.  When dry, I gave the three bats a light drybrushing with Americana “Charcoal Grey”, and then drybrushed them with Americana “Asphaltum”, concentrating mainly on their bodies and the wing spines.

I then carefully gave their bodies a light drybrushing with Crafter’s Acrylic “Cinnamon Brown”.   After that, I mixed a little Folk Art “Barn Wood”, and Folk Art “Milkshake”, and drybrushed their faces.  Next, I painted the insides of their ears with the “Milkshake”, and then painted their mouths with Americana “Shading Flesh”.   I then tried to paint their little fangs with Americana “Snow White”, and their eyes with Ceramcoat “Bright Red”.

I decided I wanted a little more highlight on the bat bodies, so I gave them a final drybrush with some Americana “Light Cinnamon”.  I then worked on the stones they’re perched on; drybrushing them first with Americana “Neutral Grey”, followed with a drybrush of Folk Art “Platinum Gray”.   Lastly, I painted the all the bases with Americana “Mississippi Mud”.
I let the figures dry overnight and the next day I gave them a coat of Americana “DuraClear Matte” varnish.    Then, when  the varnish was dry, I used some white glue to flock the bases.  Another overnight dry, and I sprayed them with Testors “Dullcote”.

NOTE: Recently I had been using Winsor & Newton Professional “Matt Varnish”, but I have found those Bones figures have since turned tacky; so stopped using it on Bones.

I’ve always painted bats by painting them Black and then simply drybrushing then some sort  of Grey or Blue-Grey.  This time, I actually Googled “Vampire Bats”, and was surprised to see how Brown they actually were, and their faces were mostly bare skin.  So, I thought I’d try something a little different this time, and go for a more brown-colored bat.    In the end, I’m happy with how they turned out, and I think they look a lot better than if I had had just dybrushed them Grey.

via All Bones About It http://allbonesabout.blogspot.com/2019/04/giant-bats-bones-4-figures.html
from Tumblr https://harfordhawks.tumblr.com/post/184527315818
via IFTTT