Monday was a holiday, and I was able to finish up a couple of things on my work desk.  I have had 12 of the 16 figures wanted for two stands of spears for my Cold Islander army (Dark Ages mostly Vikings) for the Northlands/Portable Fantasy Campaign, and I finally received the inspiration (thanks be to Calliope) to finish off the last four.  They have been stalled for many months at this point.  However, as usual, once finished I usually have no trouble getting them based, varnished, and logged in my painting register.  That completes the originally planned Cold Island army (3 heroes, 2 blades, 6 warbands, 2 spears and 2 shooters in Hordes of the Things), and I can now move on and start working toward fielding the other two incomplete armies.

I also finished up and based a stand of 8 Romans (or Romano-British) from various Prince August and Dutkins home casting molds.  At this point both the Saxons and the Romano-British have some options in a Dux Bellorum game, so I am looking forward to an opportunity to get that on the table, hopefully before Christmas. 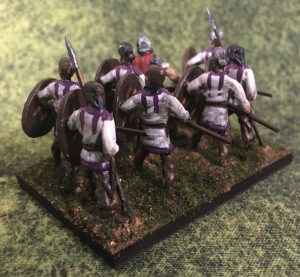