Having finished the British infantry, the next task is to try to do something with some British cavalry. The excerpt below shows a sergeant of a British light dragoon regiment in 1793, and is from Funcken’s The Lace Wars, Vol. 2.

For A Gentleman’s War, I will want a unit of 6, and the recent casting sessions have produced the necessary pieces:

I started in on one this morning, and have concluded that I want to file down even a little more of the lapels and lace originally cast in.  I also hope to suggest the helmet crest a little more closely by filling in the gap above the brim with epoxy putty.

Here’s where the first one is so far: 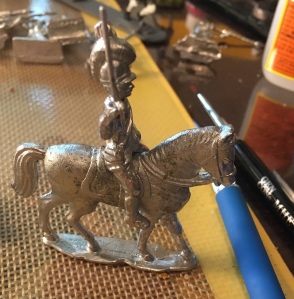 via The Sharp End of the Brush http://sharpbrush.blogspot.com/2019/06/expanding-french-revolution-project_15.html
from Tumblr https://harfordhawks.tumblr.com/post/185614978188
via IFTTT