Well, I was able to squeeze in some painting time last week after all, (despite Fall-In being this past weekend) and I finally finished the figure I had been working on for the past 3 weeks: Bandit Leader, from the Bones 3 Stoneskull Expansion, Part 3.  This is the final figure I had left to do from this set.
The figure was a bit oddly sculpted I felt, being almost entirely two dimensional looking.  So I decided to do a little modification on him to help look less stilted.

I prepped this figure in the usual way; soaking it in a dish of water with a couple drops of dish-soap added, then giving it a light scrub with a soft toothbrush, and then rinsing and drying it.   I then cut both arms at the elbows and after slicing off a small angled section of each arm, re-glued them so they bent in more.  After that, I glued the figure to a black-primed 1" fender washer with Aleene’s Tacky glue, and then placed the figure in my painting grip. 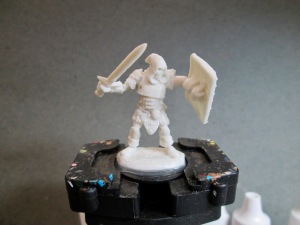 I began by painting his armor with Ceramcoat “Black”.  When dry, I drybrushed the armor with  Folk Art Metallics “Gunmetal Grey”.  I then painted his skin with Americana “Shading Flesh”. 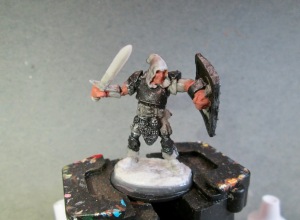 I then continued with the “Raw Umber, using it to paint all the straps and the pouch on his belt, as well as the grip of his sword.  After that, I painted the front of his shield with Folk Art "Deep Tomato Red”,the back with Americana “Mississippi Mud”, and the sword with Americana “Zinc”.  Then, when the figure had a while to dry, I gave the entire thing a wash with  Citadel “Agrax Earthsahde” wash.
Unfortunately, I must have fouled my “Agrax Earthsahde” or something, because I found in many places (see the base of the hood for example) it dried white for some reason. 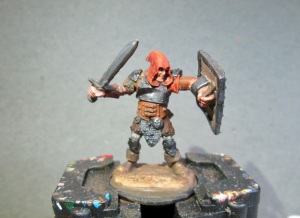 Next, I highlighted the skirt with Nicole’s “Brown”, and then the leather armor with Accent “Golden Oxide”.  I then highlighted the belt with Americana “Sable Brown”, and the shoes, belts and straps with Folk Art “Teddy Bear Brown”.  After that, I highlighted the face of the shield with Ceramcoat “Bright Red”, and then painted the sword with the “Gunmetal Grey”.  I then went around and highlighted all the metal with Ceramcoat “Metallic Silver”.
Lastly, I painted the figure’s integral base with Americana “Bittersweet Chocolate”.
I let the figure dry overnight and the next day I gave it a coat of Americana “DuraClear Matte” varnish.    Then, when  the varnish was dry, I used some white glue to flock the base.  Another overnight dry, and I sprayed it with Testor’s Dullcote". 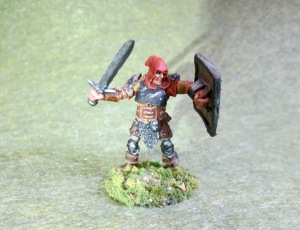 Well, considering he took 3 weeks to complete, I’m glad to finally have him done!   There’s nothing that great about him, but he will do just fine for the table top.

via All Bones About It http://allbonesabout.blogspot.com/2018/11/bandit-leader-bones-3-figure.html
from Tumblr http://tumblr.hawks-club.org/post/180039422253
via IFTTT