Back in June I painted the Count Lorenth figure from the Bones 2 Expansion Set 2, to enter in the Reaper Facebook Page’s Summer Painting Contest.  I had to enter anonymously, so I wasn’t able to identify myself as the painter until after the contest was over.  The contest ended last week, so I can now post this article.  I didn’t fare too well with my game table style up against really top notch display painters, garnering only 22 votes; but it was fun to take part.
While I didn’t personally get the Expansion Set 2 during the Bones 2 Kickstarter, I was able to pick up this figure in a trade a while back.
The figure comes with the rider already attached, so the first thing I did was pry him off his mount to make painting easier.  I forgot to take a photo of the figure before I disassembled it, so here is one from the Reaper store.

I then prepped both pieces in the usual way, soaking them in a dish of water with a couple drops of dish-soap added, then giving them a light scrub with a soft toothbrush, and then rinsing and drying them.    I then trimmed the horse’s base and glued it to a black-primed 1.25" fender washer with Aleene’s Tacky glue.   And, when the glue was dry,  I put it in my Citadel painting grip.

I began by painting the entire figure with Ceramcoat “Black”.  I then drybrushed the caparison with Americana “Neutral Grey”, followed by a lighter drybrushing of Folk Art “Platinum Gray”.  Next, I drybrushed the main and tail with Citadel “The Fang”, and after that I drybrushed the body of the horse where it could be seen, with Folk Art “Barn Wood”. 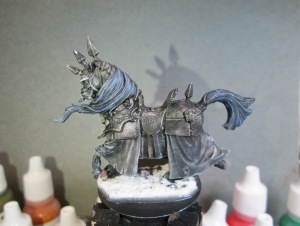 I then painted the barding with Folk Art Color Shift “Black Flash”, and the saddle and reins with Reaper MSP “Coal Black”.  After that, I painted the decorative metal parts with Ceramcoat “Bronze”.

I then finished painting the faces on the skulls, and then I painted the horse’s hooves with Americana “Charcoal Grey”.  After that, I painted the horses eyes, and some dripping gore on his nostrils and hooves with Ceramcoat “Cherry Brown”, and then highlighted the eyes and gore with some Ceramcoat “Opaque Red”.  I also used the “Opaque Red” to paint a tear on each skull, and lastly, painted the figure’s base with some Americana “Raw Umber”.
I let the figure dry overnight and the next day I gave it a coat of Americana “DuraClear Matte” varnish.
I wanted to decorate the base somehow, so I tossed about some ideas in my head, and decided on having some undead skeletons emerging from the ground in the wake of their evil lord.   So after scrounging around a little, I found an extra copy of the Skeleton Warrior Sword figure I had, and proceeded to chop him up into some useable pieces.    I glued his upper torso to one side of the base, and half his shield to the other side, using the Aleene’s Tacky glue.  While the glue was still wet, I sprinkled a little sand over it.  Then when the Tacky glue was dry, I covered the rest of the base with white glue, and covered it in a course sand mixture. 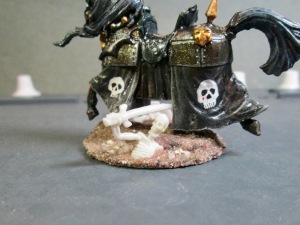 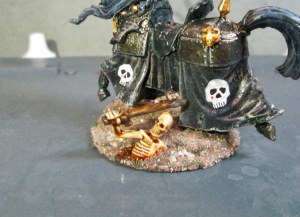 When the wash was dry, I painted the skeleton with Americana “Bleached Sand”.  I then “rusted” the sword, and shield rim and hub, by splotching it with Crafter’s Edition “Spice Brown”, and then Accent “Golden Oxide”.  I then painted the sand base with the Walnut", followed by drybrushes with Americana “Mississippi mud”, and then Folk Art “Barn Word”, and lastly some of the “Bleached Sand”.
I let the base dry overnight and the next day I glued on some bits of grass tufts.   Another overnight dry, and I sprayed the horse and base with Testor’s Dullcote".
Next, I worked on the knight.   I put him in an alligator clip to make holding him easier.

Much like the horse’s barding,  I began by painting the whole knight with Black, and then painted his armor with the Color Shift “Black Flash”.  When dry, I gave the armor a wash with the “Nuln Oil, and then when the wash was dry, drybrushed it with some of the "Black Flash” mixed with a little of the “Metallic Silver” 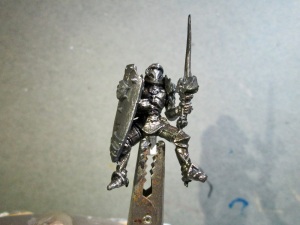 Next, I re painted the shield Black.  I then worked on the visor, which I hoped to make look like it was glowing.  I first painted it with White, and then painted it with Nicole’s"Neon Green"., and lightly drybrushed some of the “Neon Green on the surrounding armor.  I then painted a thin strip on the inside of the open visor with the White again, slightly thinned. 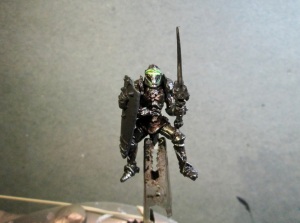 Next, I painted the decorations on the shield, and the hilt of the sword with the "Bronze”.  I then painted the blade of the sword with Reaper MSP Bones “Cinnamon Red”, and went dry, went over it with a mix of the “Cinnimon Red” and some Folk Art Color Shift “Red Flash”.  I wasn’t happy with the outcome, so I tried panting over it again with some Folk Art Metallic “Bright Red”.  I liked that better.  When it was dry, I did some light highlights across the blade with the “Metallic Silver”.  I then highlighted the decorative bits on the shield and the hilt, that I had originally painted Bronze, with some of the  “Wedding Gold”.  I then highlighted the edges of the shield with some Apple Barrel “Apple Black Green”.
An overnight dry, and I sprayed the figure with Testor’s Dullcote".   I then glued the two pieces together, and it was done. 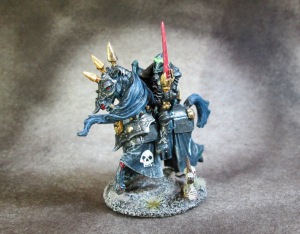 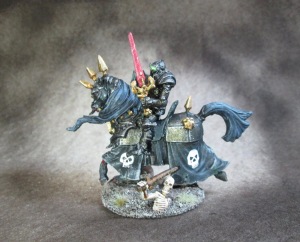 I’m pretty happy with the way he turned out, even if he isn’t competition worthy.  If I have ever have an undead horde that needs a general, I have my man. 🙂

via All Bones About It http://allbonesabout.blogspot.com/2018/08/count-lorenth-bones-2-figure.html
from Tumblr http://tumblr.hawks-club.org/post/176949524608
via IFTTT