Chris Palmer     This past week I assembled a prototype Bone Wheel terrain piece for the “The Bone Wheel” scenario in the Frostgrave supplement book, Thaw of the Lich Lord.    Since we usually have 6-8 players in our Frostgrave Campaign games, I intend to make three more of these now that I have finished the prototype.
The scenario describes the Bone Wheel as, “A gigantic wheel, sitting some eight feet off the ground on a central axle…the wheel is constructed of human bones, bound together with old leather straps…”   I knew there was no way I was going to make a big wheel out of 28mm bones, as it would take hundreds, so I headed to the local Dollar Tree store in hopes of finding something that would be bugger than 28mm but not so large that it wouldn’t look too out of place with 28mm scenery and figures.
Happily, I found a skeleton Halloween garland that looked like it would suit the purpose perfectly.

But, before I built the wheel, I wanted to make the central axle.  So I dug through my wood bits box, and found some pieces I thought would work; a disc, a couple small spools, and a small soda bottle shape.  I glued those in a stack on a 2" fender washer.

I decided the center needed some sort of cover piece,  so I cut one of the ribcages in half, and glued that to the center.  I then did a test fit of the two parts.

Happy with the fit, I used some of the string that came with the garland to make some lashings around the bone junctures, where the central spokes met the outer rim bones. I then sprayed the parts with flat black primer.  And, as seen in the photo below, I began drybryushing the central axle with some aged wood colors. 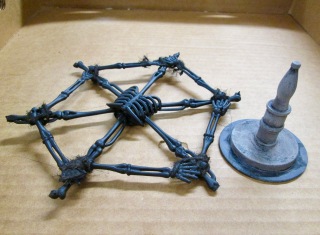 It was just a matter of finishing painting everything, and then fitting the two pieces together.

I’m happy with how the project turned out.  Since this is a scenery piece that will probably only ever be used for this scenario, I didn’t put a lot of effort into it.   Still, for a quick job, I think it looks pretty good.

via One More Gaming Project http://onemoregamingproject.blogspot.com/2017/09/frostgrave-thaw-of-lich-lord-bone-wheel.html
from Tumblr http://tumblr.hawks-club.org/post/165093894068
via IFTTT